Guest Post | God is on the Move! by Bill Elliff 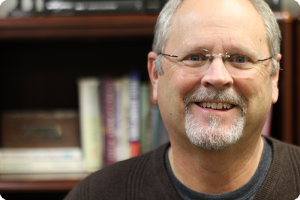 Today, RonnieFloyd.com welcomes guest blogger, Bill Elliff. Bill is the Sr. Teaching Pastor of The Summit Church in Little Rock and Conway, Arkansas, and Pastor/Church Director of the OneCry Initiative. Bill is also a published author, having recently published One Cry: A Nationwide Call for Spiritual Awakening with co-author Byron Paulus. His new book, The Presence-Centered Church is coming soon.

God is always previous. When someone comes to faith in Christ, you can be sure that the Wind of the Spirit has been blowing beforehand—convicting, convincing, and bringing faith to a heart by grace.

What is true of an individual heart is true of God’s work in revival. Every Great Awakening has been preceded by years of growing spiritual activity. A veteran of the Welsh Revival wrote:

“Though every revival ultimately culminates in a form which attracts the attention of all, no revival is of sudden origin. Behind the startling outburst is a process which sometimes goes on for years, a purifying and preparatory process. It was so in connection with that of 1904.”1

Most spiritual leaders across our nation are recognizing that there is more activity for revival happening than at any other period in our lifetime. God is on the move.

In the days before the coming of Christ, “all of Judea and all of Jerusalem” were coming out to hear John the Baptist as he prepared the way for the Lord. The crowds, the tax gathers, and even the Roman soldiers were all asking, “What shall we do?”2

This past summer we witnessed the re-defining of marriage in June, the Planned Parenthood revelations in July, and the Ashley Madison exposure in August—all revealing the massive wickedness of our nation. Was this an accident? Or is God exposing who we are as a nation to bring us to such desperation that we will cry out to Him? All around us people are asking, “What shall we do?”

All across the nation right now, in every major denomination there are men who are sounding the cry for revival in the church and awakening among the lost. Thousands of pastors are preaching messages on revival… messages of repentance, coming judgment, but great hope if we will “pray and seek His face and turn from our wicked ways.” In Prescott, Arizona a group of churches spent the last 8 weeks all studying a series on revival, culminated by a rally of all the churches so they could have a common language and common burden.

Last year, 60 revival leaders gathered for the National Symposium on Revival sponsored by the OneCry initiative. Three days were spent in preparing and praying for what we hope to see in the next Great Awakening. But not just well-known leaders. The conversation about revival is on the tongue of most serious believers. We are realizing that nothing can save us but an invasion of God’s Spirit.

The National Prayer Committee, comprised of most major prayer initiatives across the nation, recently adopted the National Prayer Accord.3 They are urging churches and ministries to adopt this rhythm of praying for revival every week as individuals or groups, every month in a called prayer meeting of the church, every quarter gathering with like-minded churches in their areas, and every year on the National Day of Prayer (the first Thursday in May). Hundreds of churches are agreeing and joining in this movement.

There is a rising tide of explicit agreement that only God can save us and that we must repent and cry out!

Brent Brooks, a pastor in Reno, Nevada, came back from a conference on revival burdened for his city. He didn’t know what to do, but began to call pastors and meet them for lunch. To his amazement, he discovered there were 6 different groups of churches that had been meeting in the past year all crying out for revival… and none of them knew the others existed!

Brent was used, along with the OneCry initiative, to pull all of these groups together for a day of prayer for revival. 450 leaders came the first year and over 700 this past year, all burdened for spiritual awakening. This has led to quarterly prayer gatherings for revival in Reno and multiple initiatives. The pastors now believe that revival is coming to America and that it’s going to start in Reno!

The pastor of the one of the largest churches in Washington, D.C. publicly apologized recently for not cooperating with other pastors and churches. This led to a prayer gathering on the Washington mall with over 5,000 believers.

In the past few months, I have been invited to two gatherings that will unite leaders from every group across America—the Awaken America Solemn Assembly in Atlanta in January and a National Solemn Assembly in the Dallas Cowboy stadium in Texas, July 16, 2016. Similar gatherings have been held in Texas, Louisiana, and North Carolina, gathering tens of thousands together for prayer. 10,000 students gathered in Minneapolis, MN on the National Day of Prayer.

A CRY IS ERUPTING

Two years ago, a group of Southern Baptist pastors felt so burdened that they invited pastors to join them in Dallas for two days of nothing but prayer for revival. 350 men came and the response was so great that another meeting was held the following January in Atlanta, where 450 leaders attended. Out of this, at last count, over 17 states have held similar gatherings with thousands of pastors involved.

Recently in a town of 18,000 (Eldorado, Arkansas) the mayor and city council called the town to 40 days of prayer and fasting. When outside secular groups threatened to sue them, they proclaimed they would not back down. I recently was invited to lead a cross-denominational pastors’ prayer meeting there. It was one of the most vibrant prayer meetings I have witnessed in many years.

Revive Indiana was an initiative designed to come into one city for a week, calling the people to prayer and then returning 52 days later for a time of witness and harvest. Instead, the initial prayer meeting exploded and never stopped. One volunteer said he came for 7 days and instead stayed 7 months! Now that movement has spread to seven different cities in Indiana.

THE GOSPEL IS ACCELERATING

Samuel Davies, the President of Princeton who was known as the “Apostle of Virginia” during the First Great Awakening, said that during the revival “the gospel became almighty and carried everything before it.”

The ultimate agenda of revival is that God’s “glory will dwell in our land” that would lead to the rapid advance of the gospel.4

At Princeton, the Christian Union leaders have begun to pray two hours a day, every day. The result is more conversions than they have seen in the last 25 years and their Bible groups so full that they had to close them for lack of leaders. The Christian Union is now the largest service organization on campus!

Even in the world of entertainment, the phenomenal success of “War Room” and “Woodlawn”—both movies totally dedicated to prayer and spiritual awakening—are seeing people come to Christ. At this writing, after just one week of Woodlawn, reports are in that over 3,000 athletes have come to Christ!

Everywhere around us we see the signs of God’s preparatory work for the next Great Awakening. God is on the move. How can you join Him?

Join God in what He is already doing, and be part of what He will do in the days to come.

There are Times a Family Just Needs to be Together: 2016 is One of Those Times for Southern Baptists

There are times a family just needs to be together. 2016 is one of those times for our Southern Baptist family. This is a season when our family gathering should be a high priority for us all.

I realize your options for conferences are plentiful and you may not enjoy going to a convention. They may seem boring or even at times, irrelevant. We changed the format for our 2015 Southern Baptist Convention in Columbus. It was done in a new and fresh way and was engaging to all who attended. The response to this new format was fabulous.

I am confident that if we set aside our own personal preferences, we will all find value in the convention. This is a critical time for us to come together as a family. Why is it so important?

1. Bringing home 600-800 missionaries from across the world should call all of us to the highest level of concern.

Hundreds of men, women, and families who have served our Lord faithfully and fruitfully as missionaries from our churches are affected. Southern Baptists should want to come together to find out what is happening and how we can reset for an even greater day in mission expansion in the future.

Every church that gives through the Cooperative Program or to the Lottie Moon Christmas Offering for International Missions should ensure their presence in St. Louis. Each church’s messengers can then go home and share the reports with their church family.

If we are going to take our vision of reaching the world for Christ seriously, we are in a critical drawback to accomplishing this goal. Therefore, this is a time to come together on June 14-15, 2016.

2. We live in an America that is searching intently for a direction and future in 2016.

In November of 2016, our nation will vote for the next President of the United States. Worldviews are colliding fiercely. Religious liberty, the sanctity of human life, and the clear understanding of family are each at stake. Beyond that, we are witnessing lawlessness at an unprecedented level and racial tension is ever occurring.

Our Southern Baptist family needs to come together in 2016 before this Presidential election. Our nation has never needed us more to pray, but also to be the voice of hope.

3. We believe we need God to awaken America and empower us to reach the world. 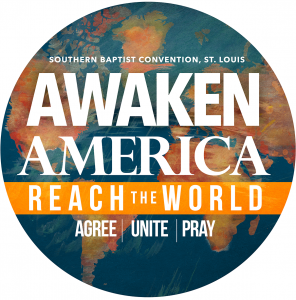 Awaken America, Reach the World is the theme of our 2016 Southern Baptist Convention on June 14-15, 2016. I do not know of two greater needs in our lives today.

We need to see God awaken America! We need spiritual awakening. We need to pray for the 3rd Great Awakening to occur in our nation. Yes, a genuine Jesus revolution!

We need to receive such power from God that we again have our vision on reaching the world for Jesus Christ. It is time to move beyond talk and sermons; now is the time to escalate our intentionality from attitude to actions to reach our world for Christ.

4. Investing in the ministry of the gospel and its expansion throughout metropolitan St. Louis.

Metro St. Louis is a city in deep need of the gospel of Jesus Christ. The city is experiencing racial tension that will find its ultimate answer only in Jesus Christ. The lostness of the city continues to grow.

Dr. John Yeats, Executive Director of the Missouri Baptist Convention, informed me this week that during the week of Crossover St. Louis and the week of the Southern Baptist Convention, twenty-seven new churches will be planted in metro St. Louis, increasing the number of churches in the region significantly. I love this vision and we need to pray, encourage, and participate with them in this grand work.

There are times a family just needs to be together. 2016 is one of those times for Southern Baptists. Begin to plan now. Come on, we need you. It is time to be with our family.